What Happens if You Drive Away from a Hit and Run Accident? 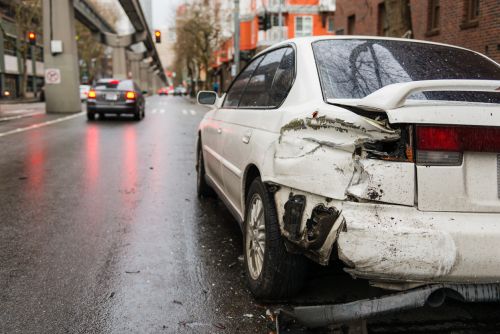 The moment after a collision can be traumatic and panic inducing. However, the decisions you make in that moment – especially whether to pull over or drive away – can change your life. Find out what happens if you drive away from a hit and run accident.

Connecticut Law Says You Must Stay and Render Aid

Getting your Connecticut driver’s license comes with a number of responsibilities. By getting behind the wheel and driving on Connecticut roads, you are agreeing to follow state driving laws. That includes the law that says if you knowingly hit another vehicle and cause damage or injury, you must:

You are also required to provide the same information to the owner of any vehicle or property damaged by the crash (such as the owner of a home or business struck by a vehicle because of the accident). However, you can’t do any of that if you drive away from a hit and run accident.

Fleeing the scene of an accident is a crime in Connecticut. If the police find you, you could be charged with “Evading Responsibility”. The severity of that crime depends on the seriousness of the accident. At its most basic level, evading responsibility involving injury or property damage is a misdemeanor charge with penalties of up to 1 year in jail and $75 - 600 fines. A second offense raises the fine to $100 to $1000. However, as the injuries grow more severe, evading responsibility becomes a felony, and the penalties increase:

However, there are defenses to the criminal charges caused by a hit and run accident. For example, the prosecuting attorney may not be able to show that you knew you were in an accident at all. There may also be problems with the way the investigation was handled that can exclude key evidence and get your case dismissed.

Can You Escape a Lawsuit if You Drive Away After a Crash?

It is true that in Connecticut, victims of hit and run drivers can rely on their own mandatory uninsured / underinsured motorist (UIM) auto insurance. However, the limits on those policies are often less than the cost of medical care and physical repairs following a serious crash.

Despite the risk of serious criminal charges, some Connecticut drivers still drive away from hit and run accidents. This may be because they are afraid of being sued in a personal injury lawsuit. It is true that in Connecticut, victims of hit and run drivers can rely on their own mandatory uninsured / underinsured motorist (UIM) auto insurance. However, the limits on those policies are often less than the cost of medical care and physical repairs following a serious crash. That means if the injured person can find you, they are likely to sue you.

The police are skilled at locating hit and run drivers and issuing evading responsibility tickets. Even when they don’t, a private investigator or crash reconstructionist hired by the injured person or his or her insurance company may be able to use information available at the scene to identify you or your vehicle and get the information needed to file suit. When that happens, the fact that you fled the scene can and will be used against you to prove you were at fault for the crash.

Any criminal conviction, including evading responsibility, can be used to prove that your negligence caused the crash. That means by driving away, you may give up defenses you otherwise would have had including showing that the other person was ultimately at fault.

It is never wise to drive away from a hit and run accident. It only creates bigger problems later if you or other people were injured in the crash. Instead, stop, identify yourself, and render aid, then contact a personal injury attorney to help establish your own injuries and seek benefits from your insurance company. If you don’t, you may find yourself needing a different kind of lawyer to defend against misdemeanor or felony evading responsibility charges that could send you to jail and change your life.

At The Lebedevitch Law Firm, our personal injury attorneys and criminal defense team can help you with all your legal concerns after a hit and run car crash. We can help you protect your insurance claims, argue against allegations of fault, and even defend you from criminal evading responsibility charges, so you know all the angles are covered. Contact The Lebedevitch Law Firm today to schedule your free consultation.

The legal process is often hard to understand, and in many cases seems like the cards are stacked against you. Fairfield attorney Stephen Lebedevitch brings nearly a decade of experience to his practice to ensure that you never feel like you are lost without answers. Stephen makes you feel like you are the only person in the room, even if you are in a crowd of hundreds.

We hope everyone is staying safe and healthy during this crazy time. We want to let everyone know that we are open for business and working remotely. If you have any legal needs or questions we are available to meet via Skype or Zoom, and always available by email and telephone.

In regards to Covid-19,  We are reviewing the best guidelines for our city and state for how

we should conduct business and plan to update this message as soon as we can.

Please call our office(s) to get learn how we are engaging with current clients and new at this time.